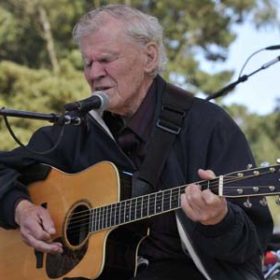 Rest in Peace Doc Watson. March 3, 1923- May 29, 2012. Thank you from all of us at Bourgeois Guitars for the gift of your music. We will cherish the memory of you and keep you forever alive in our hearts.

“He is single-handedly responsible for the extraordinary increase in acoustic flat-picking and fingerpicking guitar performance,” said Ralph Rinzler, the folklorist who discovered Mr. Watson in 1960. “His flat-picking style has no precedent in earlier country music history.”

We are honored to say that Doc Watson owned and played a Bourgeois guitar that he received from Ricky Skaggs on his 80th Birthday. Doc told Dana Bourgeois that his Bourgeois guitar was great out on the road as it remained stable and played in tune. We used to love hearing from folks who saw Doc playing that guitar on stage, they reported that he seemed to really love it.

Doc’s guitar is a Custom Vintage D with a cutaway. It has a 1 3/4″ nut width. It has an Adirondack top and Indian Rosewood Back & Sides and the old “Ricky Skaggs Model” specs: Abalone rosette, Ivoroid binding on the headstock, fingerboard and body. 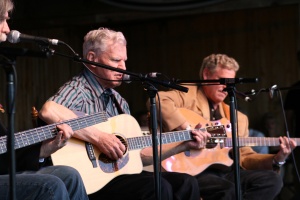 (Thanks to Dan Miller for the photo)