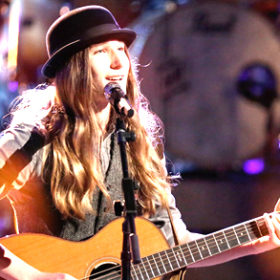 A talented singer/songwriter with a big expressive voice and a flowing mane of hair, young Sawyer Fredericks had been honing his craft well before he became a contestant on a national TV competition. Inspired by artists like Creedence Clearwater Revival, Ray LaMontagne, Johnny Cash, Simon & Garfunkel, and Keith Urban, Fredericks is from the small town of Fultonville in upstate New York, where he lives with his parents on the family farm. He started playing guitar at the age of ten and recorded his first six-song demo of original songs just two years later. Fredericks issued his first full-length outing, Out My Window, via CD Baby in 2013, and in 2015 (at the age of 15) he tried out for the popular national singing competition he is currently a part of.