As versatile as they come.

More than thirty years ago, Dana was engaged by a major American manufacturer to design a guitar sized between the OM and Dreadnought. The result, later christened the Jumbo OM, was prototyped and widely displayed in the late 1980s though not produced until the founding of Bourgeois Guitars. Through a desire to create an even more versatile body shape, Dana began building the JOMT which shares the same profile as the JOM with a thinner OM depth side.

For years, people have asked, why don’t you make a Grand Auditorium? The real answer is, under the disguise of our JOMT, we’ve always made one. New for 2021, we are now offering our JOMT as the Grand Auditorium it is and always will be. 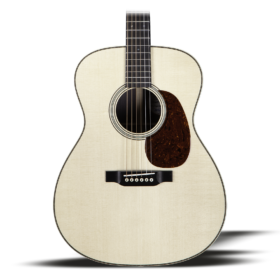