The L-DBO is larger than a 00, slightly smaller than the 000/OM, and designed with a 25” scale neck. It’s relatively narrow upper bout imparts a distinctive wedge-shaped appearance, setting it apart from the 0/00/000 “gene pool”. As significantly, the L-DBO conceals two secret weapons: An unusually large soundhole for its size, and narrow, 1/4” top bracing which combine to produce unusual power and presence in such a small package.

“After a lifetime of playing Dreadnoughts, the L-DBO has become my go-to guitar”, says founder Dana Bourgeois. “Close your eyes and listen to Sierra Hull or Courtney Hartman work an L-DBO on a mic. You’re forgiven for thinking that’s a much larger guitar.”

The L-DBO is our only body size that offers multiple options of 12 fret, 14 fret, or the sweet compromise of a 13 fret neck joint. All versions are also available in a deep body option. 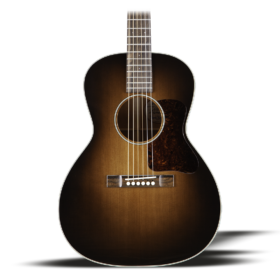