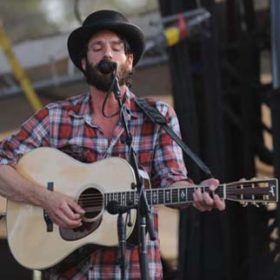 "The first guitar he handed me was a Bourgeois Country Boy Deluxe, figured mahogany, Adirondack Spruce, beautiful to behold. I had heard good things about Dana’s guitars, but had never played one myself. I sat on the bumper of (my friend) Rick’s car and...

“The first guitar he handed me was a Bourgeois Country Boy Deluxe, figured mahogany, Adirondack Spruce, beautiful to behold. I had heard good things about Dana’s guitars, but had never played one myself. I sat on the bumper of (my friend) Rick’s car and strummed a single chord. I was immediately struck with the clarity, tone and balance I was getting with just the flesh of my thumb. One chord, and I remember looking over at Rick who was grinning ear-to-ear and saying “Holy Shit!” That was it. I was sold.

Dana and his team are working on another level entirely. When Dana and I began talking about a Signature Series I knew that I wanted to create a guitar that was first and foremost a “working” instrument. A guitar built for touring. A guitar that could take a beating , yet remain stable while enduring the drastic temperature and humidity changes that it would undoubtedly encounter on the road. And in my experience, that is a very difficult trait to find in any guitar… If you’ve ever played a Bourgeois Guitar you know that Dana’s guitars are remarkably stable instruments.

I was far less concerned with the outward appearance of the instrument. I think that stumped Dana for a minute. I remember phone conversations where Dana would ask about bindings, figured woods and inlays, and me trying to explain that I thought of the guitar in much the same way that I though of any tool in the toolbox.

I wanted the guitar to be understated, with a nod to the great guitars that inspired builders like Dana to pursue, and in Dana’s case, forward the art of the Luthier.

I wanted us to focus on the balance within any given chord, and how that balance within the chord would then relate to the voice. Also there was the challenge of building something that could deliver some punch playing open chords while tuned down a whole step, something I do quite often.

Dana took all my suggestions into consideration and set out to build a guitar that we both could be proud to have our names on.

Three months later he handed me a prototype of what would become the Bourgeois-Ray LaMontagne Signature Series guitar. An absolutely gorgeous Hide Glue and Varnish Country Boy, with a Sitka Spruce top, mahogany back and sides, and Dana’s lovely Herringbone binding and Snow flake inlay on the neck. Just beautiful.

And the guitar just sings! It sounds like it’s a hundred years old and its hardly been played. If it sounds this good now. What’s it going to sound like ten years from now? Twenty? Kinda blows the mind.

I am so proud to have had the chance to work with Dana, Bonni and every one at Bourgeois Guitars. What a lovely bunch of people. And I am honored to have my name alongside Dana Bourgeois on one of his instruments.”