From a purpose-built craftshop inside a historic 1850s mill, where wool for a world at war once poured out by the thousands of yards, Bourgeois Guitars produces around 400 intimately crafted guitars each year. Dana and a skilled team of about 20 craftspeople create guitars in popular sizes and tonewood pairings for players around the world who aspire to play their best and enjoy the feeling of owning an exquisite instrument that will be a family heirloom someday.

Our founder, Dana Bourgeois, played a legendary role in the modern development of craft-built acoustic guitars. He developed a lifelong passion for learning, and building great guitars, while attending Maine’s Bowdoin College. In the early ’70s, Dana built his first guitars in his dorm room, using only the pivotal Irving Sloan Classical Guitar Construction book as a guide.

“My father was an amateur woodworker and my grandfather was a machinist. Between the two of them, I received just enough help to actually build a guitar,” he remembers.

By 1977, he’d started a one-man shop in Brunswick, Maine, repairing and building guitars. He also became immersed in the burgeoning folk and bluegrass boom in New England, giving Dana the chance to display his work to Tony Rice, who offered encouragement and honest criticism.

“I used to go to Tony’s shows and show him my latest Dreadnoughts,” Dana remembers. “Tony usually gave my guitars a good test drive and graciously let me play his famous D-28. His feedback was invariably polite, even when delivering hard-nosed criticism.”

Once, Dana showed Rice a smaller-bodied OM he’d built. To his surprise, the master flatpicker showed greater enthusiasm for the OM than for his Dreadnoughts. “This one has the better overall sound,” Dana remembers Rice telling him. “Try putting it in a bigger package.”

Upon reflection, Dana realized that, like jazz players, contemporary flatpickers used every note on their fingerboards. String-to-string, note-to-note balance and clarity held the same value for linear melodic improvisation as for polyphonic fingerstyle playing. Armed with this revelation, his pursuit of Rice’s visionary challenge led to many inflection points in the rich history of Bourgeois Guitars.

First, Dana pursued reintroducing the OM style to modern guitarists. He partnered with fingerstyle artist and OM advocate Eric Schoenberg to build vintage-inspired, modern versions of the treasured Martin OM-18s and OM-28s built only between 1929 and 1933.

The Schoenberg Soloist was built in collaboration between the C.F Martin Co. and Dana, whose greatest contribution to the project was hand-voicing each Schoenberg at Martin’s Nazareth, PA workshop. At the time, Schoenberg Guitars was the first company other than Martin to produce OM model guitars in significant quantities. Before long, countless steel-string fingerstyle and flatpicking guitarists, began to consider the OM a viable option to the industry-dominant dreadnought.

Today, the reborn Orchestral Model is a mainstay of just about every manufacturer, large and small, of steel string acoustic guitars. Also before long, the unique Schoenberg Soloist OM-style guitar with its breakthrough minimal cutaway design went on to inspire countless similar-looking cutaways.

Dana soon turned his creative instincts to imaging how he could modify the iconic dreadnought to achieve a more vintage sound, focusing on optimizing tonal balance, headroom and quickness of response. Through endless examination of vintage pieces and experimentation, Dana found advancements in guitar design to elicit the best of both body styles. These Bourgeois Guitars innovations include:

Combining thermo-cured wood, a hard, extremely thin finish exhibiting the crystalline tone of naturally aged nitrocellulose lacquer and his other innovations, creates guitars with vintage looks, feel and tone that are anything but just another replica.

Each Bourgeois guitar is built with the same unwavering attention to detail, using the finest tonewoods and a reliance on hand-assembly. CNC machines are also employed, though only when the precision provided by these computer-driven routing and cutting tools exceeds what’s possible with the human hand and eye.

To this day, Dana meticulously oversees the top and back voicing of every guitar and approves selection of all tonewoods, skills that have become legendary in the world of acoustic guitar luthierie.

We are humbled and honored to have so many great acoustic players record and perform with Bourgeois Guitars. From early masters like Doc Watson and Ricky Skaggs to today’s greats like Bryan Sutton, Sierra Hull, Andy Falco, Courtney Hartman, Sean Watson, and Ketch Secor, the guitars built in our Lewiston, Maine workshop have helped shape the sound of acoustic guitar music for more than four decades. 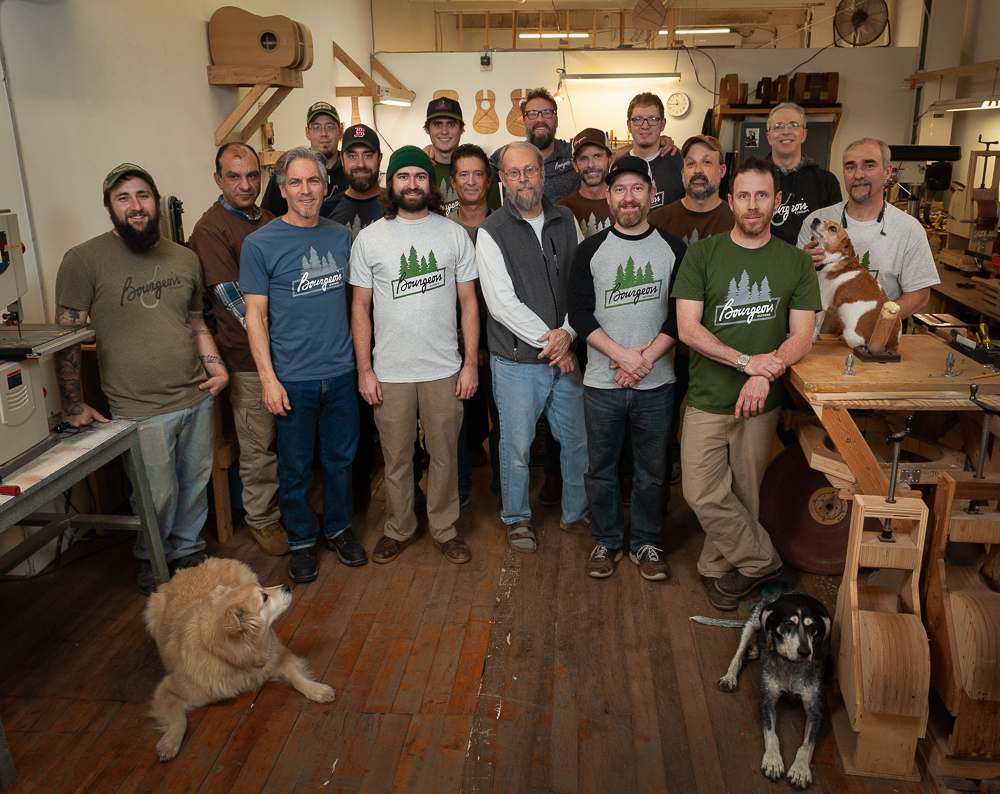